More is to be added in the future! Please wait. Alternatively, if you have an suggestions or corrections, feel free to contact me through @boykira_eng or on my main account!

These are the New Student missions that are in this game! Tapping the buttons will lead you into related areas in order to complete these tasks! One of them is already cleared when you’re starting on in the tutorial, so you didn’t miss anything.

Finishing every single missions rewards you 600x Crystals! If you’ve saved everything up, you should have 1050x Crystals in total! That’s enough for one 10 scout!

Normal Gacha Screen
Add a photo to this gallery

Over on the Normal Gacha, you can scout using Friend Points to gain 1★/2★ costumes and even have the chance of getting leveling items!

Additionally, you can receive more information and detail just by tapping the small button near the character. By the way, here's the way to tell if you got a 3★ or a 4★!

A 4★ curtain.
Add a photo to this gallery

For the 5 steps it usually means:

For the 10 steps, depending on which characters are available it means:

It may sound confusing, but essentially, if you do not get character2, in your first pull, then you'd get him on your second, and if you fail to get him still, then it just keeps going until you finally get him. If you have bad luck, this may take the entire 10 pulls just to get your desired character.

For every pull, they do have small bonuses, such as your first paid pull having a 3% 4★ rate instead of the usual 2%. You're also able to get Gold keys and Moon gems! This resets as well, so after you're done doing 5 or 10 steps, on your first step you'll have a 3% rate again and so on!

This is the main Costumes page. You are able to check for your Costumes through the コスチュームリスト/Costumes List button. You cannot manually increase the maximum of costumes you can have unless you're close to the limit. You increase the limit by 10 for 20 Crystals.

Here, we can edit the team members, the team name, automatically optimize the team, change which DX skills are active, and view Character bonuses! You have a total of 11 units to create! Ideally, you’d want a team of the same Attribute, and the higher your performance points are in the unit, you’ll be able to reach new high scores easily.

A key component to unit composition is considering how to include Character Groups. Character Groups provide a bonus to gaining more gems, food, and your Performance attribute. While this game does include official units, there are also certain characters you could bring together to form a strong team. You can check for other character groups through the Character Profiles screen. 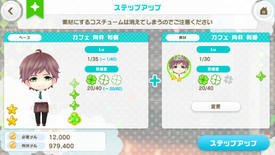 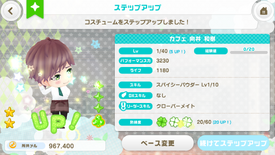 Add a photo to this gallery

If you’re familiar with the original mobage, Boyfriend Kari, you'll notice that this feature is similar to the original game! But if you’re not familiar with this feature, Step-up is a feature in Boykira where you can take a copy of the same costume and use it to increase the stats of the costume. As you continue to step-up a costume, it becomes more expensive to do! The maximum amount of times you can step up is two!

One of the main reasons why it's important to step-up a costume, is so that the costume reaches it's maximum potential! A costume becomes stronger through the step-up feature. Another reason why you’d want to try and step-up costumes is so that you can gain keys to gain access to certain character stories!

This is basically an idol roadmap. Here, we can upgrade the Performance and Life of a card! There are LOCK signs and you can unlock them through a Step Up or use 60x Large/Moon Gems. Additionally, if you step-up a card, you must fill the proficiency/熟練度 (the clover icons) to MAX to remove these LOCK signs.

There are three types of Gems:

These gems are required to progress through the map. Alternatively, if you want, you can use Crystals, however, I don’t recommend this, especially since it can be very expensive.

When you play a song in this game, you may notice you receive cute snacks! By giving a student their favorite snack, you unlock new lines and motions for them.

The 3 most centered people in a unit will gain the most snacks. It appears that other snacks that you receive are just random. If you plan on collecting snacks for your favorite character, it is recommended to play on EASY mode for efficiency and the snack gain is the same across all difficulties.

There are three types of Missions! You have Main missions, Daily missions, and Birthday missions!

By tapping the MOVIE button, you can access the songs that the player is able to view in MOVIE mode. In this mode, you can simply watch the cute chibi models dance! You can even select a stage as well. The maximum amount of people you can have in an MV, is 5. You do not have to have 5 members either! This mode is perfect if you just want to take cute screenshots and enjoy the cute dance motions as well. 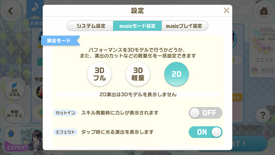 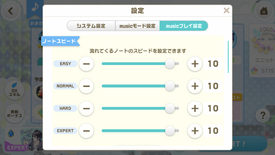 Add a photo to this gallery

The first photo is the Game Mode settings. You can edit the tap sounds, whether if you want to display the PV in full 3D or partial 3D, or in simple 2D mode.

Retrieved from "https://boykira.fandom.com/wiki/Master_Guide?oldid=2115"
Community content is available under CC-BY-SA unless otherwise noted.